Our own personal world view, and it’s animating values, are no trivial matter to us. Our view and values shape our lives and our communities, they matter to us deeply. Because of different life conditions and perspective, the values of one individual may be quite different from the values of another individual. However, the way we all feel about our own values is roughly the same. This is the window to empathy – allowing that another could feel the same powerful way about their values as we feel about our own. Empathy opens the window to compassion for the other.

Justice Anthony Kennedy’s announcement that he is retiring as Supreme Court Justice has added some reciprocity (and a lot of fuel) to the emotional firestorm trying to pass for our national debate. Life conditions have leveled things up a bit. Most parties now see it is truly an existential matter for their values right now.

Will progressive values, and the expanded human rights they have already won and sealed in law, prevail? Will traditional America now be able to claw-back the laws to a previous configuration of rights? In World Cup Soccer terms, for almost everyone in America, it feels like we are in the crucible of a knock-out round with respect to our values.

So, if you wonder how your counterpart in the values divide feels lately, they probably feel just about the way you do. No matter when one arrived at the existential-crisis-party over our values, regardless of whether a person has traditional or progressive values, presently virtually everyone’s normative values are being powerfully vectored through their own Stockholm Syndrome lens.

While it is not literally true, the well-used adage, “In Chinese written language, the word ‘crisis’ is composed of two characters, one representing danger and the other, opportunity,” does offer us a helpful image for our present life conditions. Survival life conditions tend to drastically define decency down in our triage of priorities. America is in a very dangerous time. A time pregnant with possibilities of all kinds, even some good ones. So, decency is now challenged by double Stockholm, but a window did open. If one can empathize with another, then one can find compassion for them, too. Compassion opens doors to reconciliation.

In my previous blog post I described a perennial failure of leading edge values. While personally frustrating, any given post can only deal with a very limited number of moving parts. We have some more layers to unpack with regard to the “passengers” in Jon Meacham’s hijacked plane image. This and subsequent postings will continue to unpack my reading of Meacham’s image.

The real root of society’s profound decency problem is a very difficult challenge expressed in the meme below. I fashioned the image for this blog piece – and to serve as a stand-alone social media post. I posted it on the Fourth of July to my Twitter and Facebook under the following text:

America, reconciling people on THIS is the task history has given us! 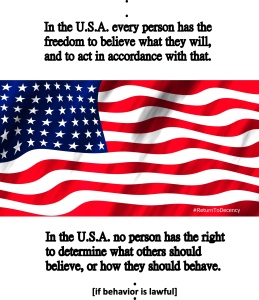 The developmental dynamics of decency are fully at play in this enormous reconciliation challenge. This is a discussion/process that can no longer be avoided by the U.S.A.

Now, please bear with me a moment here. So, in light of the developmental dynamics of decency and the present reality of our double Stockholm life conditions – for a minute let’s just imagine and allow that Jesus’ way really does work in human transformation. Let’s allow that Jesus’ way holds the key to solving the ‘perennial leading edge failure’ problem I have attempted to describe, and to unlock our arrested, closed systems.

So, what was Jesus’ way? Many sturdy responses are available to that question, e.g., relationship, forgiveness, meal-fellowship, grace, discipleship, justice, love, and so on. The clearest, most direct expression that I find in biblical text for a practical answer to the question, ‘What is Jesus’ way?’…

He [Jesus] answered, “Let us go on to the neighboring towns, so that I may proclaim the message there also; for that is what I came out to do.” And he went throughout Galilee, proclaiming the message in their synagogues and casting out demons. (Mark 1:38-39)

Some red-letter words of Jesus right there. Alright, so, the text reads that Jesus says he “came out” to “proclaim the message.” That is, Jesus went public with his message, proclaiming/teaching it to all who had ears to hear. What was “the message?” Well, that was emphatically stated a bit earlier in the chapter:

OK. So, the “kingdom of God” is what again? As before, many sturdy responses are available on this question, too. For instance, relationship with God; the grace, forgiveness, and love of God; Heaven; God’s will done; God’s Presence; and so on. In practical terms, to those who heard Jesus’ message, his proclamation/teaching meant a totally unimaginable expansion in the number of persons and groups included in God’s kingdom and care. (cf. Galatians 3.28, Colossians 3.11, …)

This “Green” value set emerged about 150 yeas ago and significantly entered U.S. culture in the 1960’s. Initial and early expressions of Green values were seen in the civil rights movement, war on poverty, women’s rights movement, gender and sexual identity movements, environmental concern/care, and so on. This Green values system seeks to extend justice and rights to greater numbers of persons and groups than pre-Green values sets.

“Green” (leading edge values) had no problem expressing itself by proclaiming the message in terms of it’s justice values. Proclaiming (declaring/teaching) justice (as understood by Green) became the primary form of Green’s expression of it’s values.

Again, as we will frequently discover, this is a problem of conflation. The prime difficulty here is the reduction of Jesus’ way, that is, what Jesus did, to mere ‘proclamation’ (declaring/teaching). As we will see next week, the conflation problem with regard to Green’s expression of justice/rights is even more complex than that.

Turns out that simply ‘proclaiming’ (or declaring) justice is necessary, but not sufficient. Delivering difficult notions such as justice on a transformative level is not as simple as it may seem. As does common decency, justice has an emergent dynamic, too.

Recall, Jesus’ way has two components. Jesus proclaimed (the K.o.G. near), and he “cast out demons.” The second, healing part, is required and in no way optional. Healing is necessary for transformation in any healthy emergence. Without healing the message is most often perceived as tyranny. Jesus’ message challenged with Love the ethnocentric nationalism of the Jewish people that he taught. (again, cf. Paul’s teachings – especially Galatians 3.28 and Colossians 3.11; and, too, Acts 1.8, 22.21; and many others)

It is not that Green has completely missed the healing dimension of transformation. As I eluded to above, what does further complicate the problem here is the fact that the healing part of Green’s expression of its values has also been the victim of harmful conflation. Given the nature of much Green (Naïve) expression, finding more reduction makes sense. “Naïve expression,” what is that? We’ll carry on from right here in my next blog post: Being “Naïve” Green (et al.) [7/15]. Please continue the conversation this week, and stay tuned. 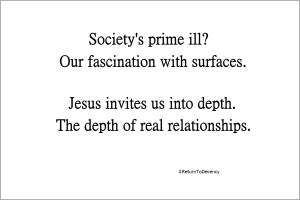 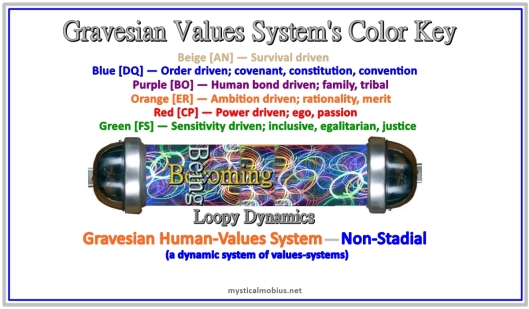 [Recommendation ~ Leadership and Self-Deception: Getting Out of the Box] 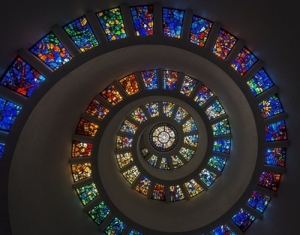