This week we conclude our four-part mini-series and brief consideration of Barry Johnson’s Polarity Management [PM] work. In the first three installments we’ve differentiated problems to be solved from polarities to be managed—(1st—Root of polarization problem?) (2nd—Unsolvable problems) (3rd—Unresolvable polarization). 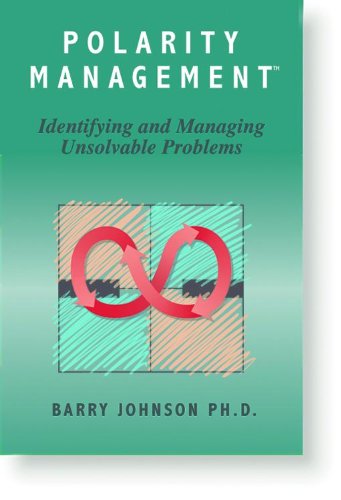 Dealing with dilemmas is working with an order of relationship that transcends and includes binary problem solving. Johnson writes in PM, (pg. 24):

We ended last time part-way through discussion of the “Polarity Two-step.” This is the designation Johnson gave the dynamic movement built into polarities. The Two-step is up/across and down, then repeat ad infinitum. We began with considering the up/across, so, let’s add down. In Johnson’s words (PM, pg. 14-15):

With time, a focus on one upper quadrant as a solution, and the relative lack of attention to the original pole, the movement continues to the downside of that pole.

Neither pole in a dilemma is either a problem or a solution, together they form a whole that needs to be managed. As in the earlier breathing example, neither pole (inhale and exhale) is a problem, solution, or mistake; each is half of a polarity that needs managing through the ongoing shift in emphasis between inhaling and exhaling.

The grass is always greener on the other side of the fence is a classic proverb in which one “issue” is literally that there are two sides. So, while to my knowledge Johnson doesn’t use it, I reckon this makes for a classic line in PM. For one thing it describes the energy that drives the ‘up/across’ movement on the PM map. Plus, there is a simple reason the grass is greener on the other side, because what we discover is even though we initially find the greener grass plentiful, now that cattle are eating and stomping around on that side of the fence the stress on the grass will soon take its toll and produce scarce brown grass [a move to the pasture’s downside].

An exclusive focus on the upside of one pole (thinking of it as a ‘solution’) creates movement to an unintended downside. The good news, in the language of our proverb, the scarce brown grass left behind in the move to the greener side is now resting from being eaten and stomped all over and, thus, greening up. The downside of the first pole (underfed cattle) was not ‘the problem,’ just as the upside of the other pole (greener grass) is not ‘the solution.’ Both sides of the fence (representing both poles) are not a problem/solution, they are a polarity to be managed. In the sense of our proverb/analogy, a rancher manages a polarity between healthy pastures and healthy cattle.

So, where are those keys?

Believe it or not, it’s the revolutionaries, frequent complainers, and chronic sticks-in-the-mud in our organizations who may well be holding the keys to effective polarity identification and management. For instance, of course, the reformers are very good at naming the downsides of the present pole and the upsides of the opposite pole. However, they are often blind to what the tradition bearers see. That is, the memory of, and desire to preserve, the upside of the present pole that the reformers are wanting to move away from; and tradition bearers are also often able to anticipate and vocalize the downsides of the opposite pole.

Polarity Management [PM] requires listening well to the various voices who are essentially advocates for some aspect of the polarity. Consulting diverse voices facilitates understanding and accurately mapping all the elements of any particular dilemma/polarity.

No space left to get very far into it, but Johnson does a fine job using figure-ground relationships to talk about seeing polarities.  Without both the black and the white neither the faces nor the chalice will exist. They are interdependent opposites (paradoxical polarity). 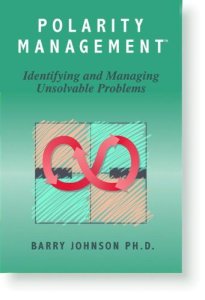 One thought on “Dealing with dilemmas”