Well, reports are that the POTUS is rather fluid on it, but I agree with him at those times when he’s wanted a full-on, Katie-bar-the-door, no-holds-barred, bring-on-the-documents-and-witnesses, Senate Impeachment Trial. I have no idea why President Trump might want the circus I’m suggesting here, and probably for far different reasons than mine, but I do know why I feel it would be a good thing. To be clear, I don’t feel a full, honest, fact-finding trial has much of any chance whatsoever of happening, although, hope springs eternal. Please allow me to explain why it ought to happen. Generally, I don’t want either side, or, what is far more likely, both sides playing this game:

First, what we surely do not want

So, what is an “Orwellian divide?” I mean this to designate the fact that society has divided itself into two groups [~ 48% ||~ 48%] who operate largely based on nearly mutually exclusive narratives (the FoxNews vs MSNBC narrative bubbles).

What I do not want is for this trial to turn into a joke about two mutually exclusive narratives going into a bar (the Senate chamber) to have a discussion under the gaze of Chief Justice John Roberts, with a lousy punchline of some kind about both groups going away having never really reckoned with the other’s alien narrative.

What we do not want is for the entire experience to turn into a typical Washington D.C. exchange, e.g., a branding contest to see who can create the best spin. For instance, in this case of the “impeachment brand,” a contest over which is worse: “basement-bunker secret preliminary hearings” or “no documents or witnesses cover-up trial.”

Our 48%-48% two-universes’ reality is not sustainable, we do well not to miss any opportunity for reconciliation.

Let me be clear about what I feel we do need

I feel both sides need to present their cases anyway they want to. We need both sides to acquire all the documents and call all the witnesses they please in order to fully make their cases. Both sides also need time and space to, through interaction, directly counter the case of the other.

Let’s not kid ourselves, this exercise will be a circus, a mess, a train wreck, a dumpster fire, pick your analogy. We could easily be talking about a scenario in which the president’s defense team calls Joe Biden, Hunter Biden, Whistle Blowers 1 thru 4, Hillary Clinton, Barack Obama, Valeriy Chaly, Jim Comey, representatives from CrowdStrike, Rep. Adam Schiff, and maybe even Christopher Steele as witnesses. I say, so be it, let them produce what they feel is their best defense of the president even if all of it seems completely irrelevant to the House Managers—it likely will, two-universes, remember.

So, why would I, or anyone, advocate such a thing?

We know how we got here

Could it have gone better in the House on the president’s impeachment? Of course.

However, as I’ve written, the legacy Blue [DQ] tools that have historically sufficed in handling presidential overreach have not worked well against the Red [CP] (ego/power) tactics of President Trump and his administration (blanket stonewalling, and using courts to rope-a-dope, etc.).

Significantly, at this point, the problems of our polarized society are distilled down into a proxy, the present Trump issue, e.g., the two-universes’ impeachment dilemma.

There are nearly eight billion ways of perceiving ‘truth.’ That mind-boggling reality is quite vulnerable to forces that can work mightily against order—e.g., a common set of facts, commitments, and shared truth. So, I’m circling back to key themes from very early in this blog series. For instance, the “JoHari Window” presents a rudimentary key to finding shared truth.  We NEED each other to see the whole. (see There is no truth) (see Shadows and self-awareness)

I’ve forgotten it’s origin, but I’ve always appreciated one particular reading of the sage Qohelet’s wisdom [book of Ecclesiastes]. On this reading, ‘Truth’ is spherical. Each person has a particular perspective on the surface of Truth’s giant sphere. Much like the earth’s visible-horizon effect, any one person’s perspective is limited to their own visible horizons (a personal, relative truth). The bottom-line in this is we need each other to share one universe together. The extent we access Truth is a function of our relationships, e.g., our shared truths.

Shared truth is only found through genuine good-faith engagement in mutual fact-finding and discernment for Truth. Reconciliation for our extreme polarization is not to be found in oppositional win-lose transactional relations. However, if it takes a two-universes Texas-cage-match Senate Trial—under the watchful gaze of Chief Justice Roberts—to engage each other genuinely, then so be it! We NEED an honest reckoning that sets political expediency aside.

It’s either that, or we could draw lots for our future.

The president’s defenders clearly want to exclude any more documents or witnesses from coming in to the trial. If, as the president insists, it was “a perfect call,” then surely the documents and the president’s close advisers show/know facts and details that could exonerate the POTUS?

If, on a straight party-line vote, the Senate majority chooses political expediency over Truth (or even truth), concludes the trial without hearing from those who were in the room (who could definitively clear this up one way or the other), then I  predict history will judge us all quite harshly. Information will keep coming out and a shared-truth will emerge. 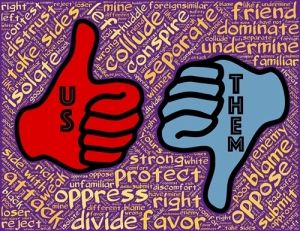 3 thoughts on “Antidote for Orwellian divide”