a mystical möbius hopes to create a space that feels like sitting around a (digital) campfire.

Another Black man brutally, needlessly SHOT IN THE BACK FOUR TIMES!

Then, at the resulting Kenosha protests of the police shooting of another unarmed Black man, seventeen year old, Kyle Rittenhouse, playing the role of vigilante, shot three people, two of whom died. I feel nothing but sorrow for young Mr. Rittenhouse and nothing but revulsion for anyone who would celebrate or glamorize this young man and his tragically misguided behavior.

It’s unclear to me what it is about how fascism works that people are not understanding at this point. The president conflates peaceful protesters (vast majority) with riotous looters (small minority) and then declares that some of the people in these protest situations are the enemy. So, seventeen year old’s answer the call by imagining they are part of a #MAGA militia sent to go guard America, e.g., kill the enemy.

There are many layers of heartbreak in this entire tragic circumstance. For several reasons this week, my feels are way too intense right now to write directly about police brutality in the context of race. Perhaps I’ll try for that next week.

Many of the stories that we tell ourselves, and each other, in order to make sense of the world are, loosely,  something like the ‘blocks’ in the game of Jenga. I’ll try to explain that in a moment.

When I wrote above, e.g., “the stories we tell ourselves, and each other, in order to make sense of the world …” it’s a tell on some of my theology commitments. “In order” in this case is the tell it’s a theology statement as order is the business of theology. Theology argues that God creates, animates, and orders existence/the world. So my statement draws on the notion of narrative theology. This perspective holds that stories are the animating energy in human existence. 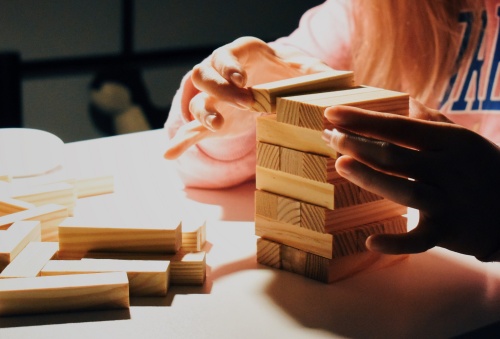 Jenga? You know, the game played with fifty-four wooden blocks. After stacking the blocks into a tower (eighteen levels with three blocks on each level) the two players take turns pulling out a block and placing it on top of the tower to form new layers of two or three per level. Causing the tower to fall triggers a game-ending loss to that player.

It has occurred to me that with the rules above—and a generous helping of imagination—Jenga makes a helpful visual analogy for imagining how our personal identity may evolve and change through time. Let’s explore that notion a bit.

A story that defines our personal horizons

Everyone has a self-identity story (an umbrella, or meta-story, naturally composed of an amalgam of stories) that determines and governs who we feel is truly with us, and who is against us. For the sake of this blog post let’s consider it to be the case that the ‘elevation’ of our umbrella story determines the inclusion horizon we operate within. Just as a fire tower enables a fire-spotter to include a much wider field of view and so be able to lay eyes on and care for a far greater number of trees. Similarly, the higher the perspective we are able to sustain, the more inclusive is our empathy for, and embrace of, others.

The way ones’ ‘perspective’ develops will, at least, be a bit different in everyone. Perhaps very different. So, these differences that develop in our personal stories can be visualized with a Jenga tower.

Imagine the fifty-four Jenga blocks represent narratives that make-up your ‘story.’ Further imagine that in the starting formation, e.g., 3 blocks by 18 levels, the height of the tower defines our base capacity to include others, e.g., none at level eighteen. Recall, “the ‘elevation’ of our umbrella story determines the inclusion horizon.” Finally, imagine that the 3 x 18 formulation creates the baseline elevation perspective that is basically exclusive to you. At this self-referential, self-locused eighteenth-level ‘elevation,’ you alone constitute ‘us,’ and everyone else is ‘them.’

For our purposes today we’ll think of this Jenga tower process as two-part solitaire with life conditions as one driver for moving blocks, and you, your dreams, plans, intentions as the other driver for moving blocks. In other words, part of the process of moving the blocks is a function of how you adjust your stories, not as a result of your change of will, but, rather in response to a change of life conditions.

So, imagine your perspective is standing on the top of your Jenga tower. As your responses to life, and your intentions, both adjust the stories (Jenga blocks) in your tower, with care new levels are added and this raises your perspective.

With grace and good providence one rises to a tipping point. On the far side of the tipping point life is essentially different by a factor of grace/love. By grace we rise to such a level that we begin to be able to imagine that others (often!) see reality very differently and our empathy begins to be engaged. Further grace, story adjustment, and tower development enable us to reach a level at which we are able to fairly (graciously) see the different viewpoints of others and even to deeply empathize with what walking in that viewpoint might feel like.

Marjorie Taylor Greene is the Republican candidate for U.S. Congress from the fourteenth district of Georgia. Greene is a self-proclaimed Q-anon enthusiast. In a NPR story Greene gives full-throated voice to “white grievance.” The story (here) quotes Greene, “the most mistreated group of people in the United States today are white males.” And from The Hill (here), Greene “said in one of several direct-to-camera videos that if she were black, Confederate monuments would make her “proud,” “because I’d say, ‘Look how far I have come in this country.’” Greene has no idea why this is demeaning & dismissive, odiously offensive, and horrendously hurtful.

Buddhists call it “monkey mind” when our attention jumps from one distraction to the next—President Trump’s ‘shiny objects’ gambit obviously depends on monkey mind in his supporters. Apparently, Greene uses her self-referential locus to distract herself from the reality of the pain and suffering of others. 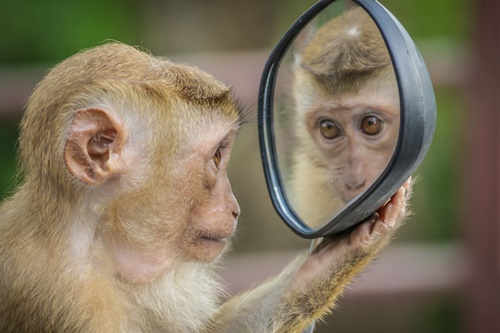 The key to what I am trying to identify here is the way that Greene contextualizes her comment when she says that if she “were black, then” she would see Confederate statues as a good thing. That remark surfaces Greene’s closed perspective (e.g., exclusively self-referential). Greene thus indicates that her perspective is based exclusively on her view without even making any effort to include other perspectives. Further, it reveals that her view has no imagination whatsoever. Obviously, Greene is simply unable to even imagine that anyone could possibly see things any differently than she does. This in spite of the fact that well over one hundred seventy-five million Americans have joined in a national chorus—many taking to the streets—expressing a perspective that is quite different than Greene’s on this.

Not being able to see past one’s own nose. That’s an idiom that basically captures it. In this instance anyway, Greene exhibits an eighteenth-level perspective [ELP], no inclusion of other’s views.

In Why We Are Polarized, Ezra Klein describes what political scientists call “sorting.” Sorting is the process by which persons/groups are deliberately sorted by issues & identities and then aligned along a particular political party axis. Since Reagan, then through Newt Gingrich, the Tea Party, and  the Freedom Party (now perhaps worst of all through Trump), this sorting has been an intentional process.

The developmental process naturally distributes (through the society) individual humans who are both below and above the tipping-point threshold. This natural distribution allows for a community (or nation) to reflect a balance in the dynamic tension that exists between those who have tipped to an imagination for, and inclusion of others’ perspectives (e.g., operating from a level-twenty+) with those who are operating from an ELP.

Through the artificial influence of political sorting, however, it is possible that one party axis may be the unfortunate beneficiary of an over-abundance of people who operate from an eighteenth-level perspective.

If by some set of circumstances a given political party, awash in passionate, active people who are all operating from an ELP, happened to gain power, then the result could be dark and dire indeed. When the vision of the nation’s leaders is limited to a party’s self-referential privilege, then empathy, compassion, and kindness quickly become the seldom seen.

Ironically, it is when the power of a society is dominated by a party of the self-referential privileged that we are all the most vulnerable to the harsh reality of a society best depicted as a grim image like: Ashes Ashes We all fall down.

I talk a good bit about Gravesian/SD development in this blog. While certainly not totally free of Spiral Dynamics influence, I am not convinced that the tipping point [“momentous leap”] allowing us to empathize and truly take on level-twenty+ perspectives allowing us to truly empathize with another is strictly dependent upon Gravesian development. However, I am convinced that if our political system insists on sorting America in this eighteenth-level perspective-is-in-charge fashion, then democracy as we know it will be existentially threatened, and much sooner than later.

Next week: No commitment on anything yet. Come and see.

5 thoughts on “Ashes, ashes, we all fall down”