a mystical möbius – curating facts, ideas, text, and media to create a digital space around a safe, cozy, yet rather eclectic virtual campfire. My hope is to render an adequate sketch of history (a rough first-draft).

“Rounding the corner on the coronavirus.” —DJT

Well, I guess so, that is, if one’s goal is to grow and extend the length of their own nose. Orwellian gaslighting isn’t really big enough to cover this recent “don’t be afraid of Covid-19” messaging from the president since his own infection with Covid-19. Rounding the corner? “Coronavirus infections jumped by almost 17% over the past week as the number of new cases increased in 38 states and Washington, D.C. [Axios].” Actually, in Wisconsin they are presently opening (on 10/14/2020) a field hospital on the state fairgrounds to treat Covid-19 patients whose numbers are now spiking. From Wisconsin Public Radio (NPR) reporting last Wednesday, Oct. 14:

Yes, we’re rounding the corner alright, we’re turning toward potential record numbers of 2,000 deaths per day by December, and, a reliable model [IHME] predicts, the highest numbers in the pandemic thus far—potentially 389,087 deaths total by February 1 (related U.S. News story here). In other words, having no plan or national strategy has not worked, is not working, and is very unlikely to work going forward.

Ever wonder how the president just keeps rounding and turning the corner on the coronavirus pandemic? ….

Complicating this is the fact that the first thing our pandemic-fatigue betrays is our short memory of important, persistent details like the nature of the Covid-19 problem—pre-symptomatic, and, especially, asymptomatic transmission, for example. We quickly forget the extraordinary significance of the term “novel” in the problem we are reckoning with, e.g., “SARS Cov 2, Covid-19 novel coronavirus.” We’re still learning precisely how hard of a problem Covid-19 really is, and that it keeps getting harder in some ways as we go, even as we continue to learn more about the nature of the virus and its transmission.

OK. In a few recent a mystical möbius posts I’ve made some significant meta-level claims. Today, I’d like to gather those together, correlate, and fine-tune my assertion with them a little bit here.

So, in a piece I published on my birthday entitled High school anarchy, I described some wisdom my high school vice-principle shared that helped shape my life.  The context of the conversation I referenced was ‘humans and existential problems,’ specifically overpopulation. I quoted Mr. Graham:

So, in the piece I published last week, The two biggest problems, I described the over-arching story that animates the American cultural zeitgeist as an economic one. Namely, “Only Money Matters” is the rather concise narrative that drives the way we work out the way our society works. I feel our extreme over-emphasis on the significance of money is a prime manifestation of Mr. Graham’s adage and strong evidence of its veracity. By making money all important, our society is immorally skewed on what is really important and this takes form as inhuman inequality. I feel my writings in sum reflect the conviction that the most significant problem plaguing humankind in America is inequality and the injustice and suffering that flows from it. Arguably, the notion that only money matters is, in large part, what helps create inequality. When we put that reality in the context of humanity globally, then it’s easy to see why I rank it so high as a problem.

OK, last week, after setting the pandemic aside for the purpose of the exercise, I named two problems that rank at the top of existential concerns: “climate collapse” (climate change) and “big tech.” I emphasized the latter because I feel that we’ll never solve the climate problem until we address the big tech (social media, etc.) issues. In his books, Sapiens, and Homo Deus, Yuval Noah Harari essentially offers the basic outline of the new Netflix docudrama, The Social Dilemma.

So, the priority hierarchy revealed in my triage process is:

One thing that came up this week really points to the willful nature of the president’s toxic-level cynicism. Over the past several months, whenever Dr. Fauci fact-checked the president—or held the president to account in any way for his constant downplaying, denial, dismissal, and gaslighting regarding Covid-19—, public disrespect and attacks on Dr. Fauci have quickly followed from the president. An example from last May: 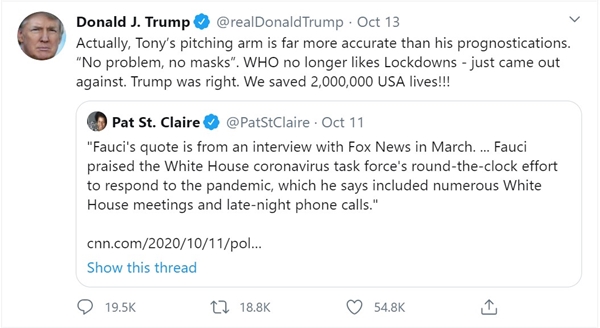 The unauthorized use, inappropriate ad in question:

Jack Tapper: Should the Trump campaign take this ad down?

On  my view, what makes this instance of Trump’s cynicism particularly egregious is it’s open, calculated willfulness. This Trump and Covid-19 ad is a clear indication that President Trump and his team are fully aware of what they’re doing. The campaign team knows that the president needs to drastically rehabilitate his image with regard to Covid-19. They also know that the president has no credibility on the pandemic. So, even though the president has no qualms about throwing Dr. Fauci under the bus, he also has no problem cynically leveraging Dr. Fauci’s credibility to advance his own political interests.

Jake Tapper asked Dr. Fauci about the possibility of the Trump campaign doing a second ad that features Dr. Fauci portraying the president in a positive light regarding the pandemic response. Dr. Fauci remarked: “That would be outrageous if they do that. In fact, that might actually come back to backfire on them.” Dr. Fauci understands the credibility differential between he and the president and I feel that if the Trump campaign does indeed try again with another Fauci-featuring ad, the good doctor will indeed create HUGE problems for them over it.

Full disclosure demands that I state Dr. Anthony Fauci has become one of my heroes. This man is seventy-nine years young and tirelessly serves you, me, and the truth fearlessly, ferociously, and without creating any doubt about his integrity.

Just how cynical are we talking here?

I feel it is now clearly evident that the president’s cynicism and contempt have no bounds. His dramatic desperation is exposing just how cynical and contemptuous this man really is. Here’s a tweet from last Tuesday evening: 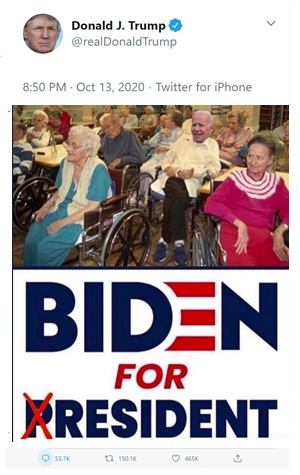 The president has, obviously, never really understood the wisdom of Anaïs Nin who famously said: “We don’t see things as they are, we see things as we are.” The president doesn’t seem to realize that when he lashes out like a schoolyard bully at his opponent he reveals his complete lack of regard and respect for society’s elders. To demonize his opponent, the president casts Joe Biden among those who the president clearly believes are (just as Trump sees military heroes) ‘losers’ and ‘suckers,’ e.g., in this case “residents” of care centers. Trump implicitly makes these disrespectful comparisons that essentially attack all elder Americans. I do not feel the president is self-aware of this, and that this entire matter is a clear indication of his complete lack of empathy or compassion. With regard to Trump’s “Biden for resident” tweet, an old friend from college said, “We’re all losers in his [Trump’s] view. Some he can use, but he can’t remember which ones all the time.” 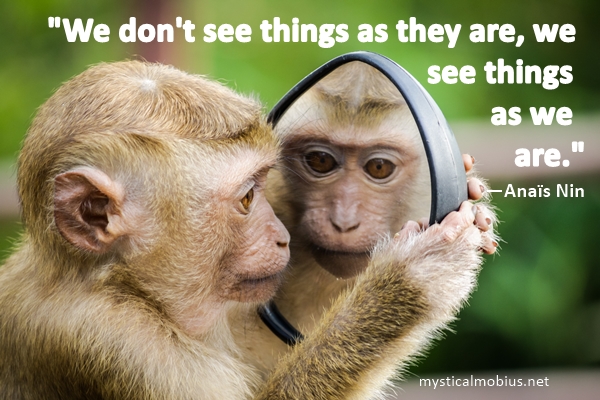 President Trump’s presidency is a pile of vile bile. The open question for November 3rd is: “Are there enough Americans who, in one way or another, see themselves in Donald J. Trump?”

Next week: “The three hardest words.” Come and see.

I never know what I’ve said till I hear the response. What did you hear me say? Note: I know, trying to introduce a big-picture idea like Spiral Dynamics (a complex developmental anthropology) in this format is ambitious. So, I’m using a serial-approach. Blog introduction (June 30, 2018). First in series (July 1, 2018). 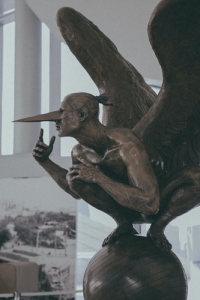 One thought on “Cynicism on steroids”