a mystical möbius – curating facts, ideas, text, and media to create a digital space around a safe, cozy, yet rather eclectic virtual campfire. My hope is to render an adequate real-time sketch of history (i.e., a rough first-draft).

‘Picking-up after an Apocalypse’ is a brief mini-series of themed posts. Part eight.

Christmas is the high holy day of the year for Christian mystics. The Incarnation story gives us the lens that helps us experience the not-twoness of (nondual) Reality. One of my favorite teachers is friar Richard Rohr. Last week his Center for Action and Contemplation (CAC) daily meditations reflected in the language of a mystic on G-d’s Incarnation (here’s the summary with links to each piece: “Incarnation: Weekly Summary“).

“There’s no room at the inn” is quickly gaining widespread currency as a common American story, and on a horrifying scale. Let’s set aside the immigration problem that is, arguably, the thorniest aspect of our ideological insistence on scarcity. In practical terms, the Covid-19 pandemic has created an extreme overwhelm situation in many hospitals with “crisis care” designations increasing. If that were not enough, soon millions of persons in America (yes, 5-10 million—12/27 edit: “Face the Nation” reported the number will be 30 million people impacted) will be facing eviction from their homes and apartments. Covid-19 has affirmed once and for all one thing that many have already known: Rent Is Too Damn High. A life-interruption like the coronavirus pandemic is far more than many peoples’ finances are able to withstand.

In the U.S., December has been the deadliest month in the coronavirus pandemic. January will likely be even more deadly than December. When you hear a news reporter say that a hospital or healthcare system is on crisis care, well, that’s a euphemism for an overwhelmed system and collapse of care. Regrettably, these sad facts are pretty much baked-in at this point. Well, they say it’s darkest just before the dawn. We could still mitigate and flatten the curve somewhat with basic public health means, that is, if we all chose to do that.

I wrote the following back in July (see here). As matters now grow increasingly harsh, I just wish it would have turned out to be less accurate:

Sadly, humans have demonstrated time and again that it takes urgency on the magnitude of collapse to animate very difficult change like the work of re-thinking all of our existing systems.

A small victory for regular order in the senate through the work of a ‘gang of eight’ leading to a 900 billion dollar Covid-relief bill. Of course, DJT doesn’t want anything like a functional congress that compromises on difficult issues to hand-over to Biden on January 20, and so he has tossed a monkey-wrench into the works even threatening a possible government shutdown in order to get the changes he wants in the relief bill (he wants $2,000 in direct payments, up from $600) and the defense appropriations-bill (he wants to revoke FCC Section 230 protections for social media platforms; and leave the names of Confederate leaders in place at present day military instillations). This is all likely just more Trumpian bluster and even Republicans are strongly insisting that the president sign the relief bill as it’s presently configured with a $600 direct payment, and leave the defense appropriations bill the way it is, too. The defense appropriations bill will likely be the first veto-override in DJT’s term.

If we think of 2020 the same way we would any year, e.g., as a lived contemplation, then at least one thing seems very apparent.

Yes. In light of the Covid-19 Apocalypse (here and here) it would seem obvious (and, perhaps more so than we have ever imagined) that human life turns on the presence, or absence, of care.

Covid-19 has revealed that the human commons in America has gone missing in action for a large segment of the population. I mean, witness our front-line medical care givers who have passionately pleaded with everyone to wear facial coverings, physically distance, and refrain from gathering. I have classified the refusal of so many to acknowledge and accommodate these simple requests as abuse that traumatizes our front-line heroes. Health care workers have fervently called on the social currency of the human commons to help flatten the Covid-19 infection curve. Sadly, they have found a serious lack of care and concern (even hostility), let alone cooperation, with their requests.

Vaccinations promise to pose similar concerns. The best responses to a viral pandemic are communal and not individualistic. The tension between these two different approaches needs to be reconciled with a preferential option for communal, collaborative ways of defeating Covid-19.

Nihilism and narcissism have gradually occupied much of American society, leaving vast swaths of the population wide open to animation by all manner of idols (e.g., money, celebrity, power, identity, and so on). Neighbors being good neighbors to all other human beings is the remedy. Nihilism and narcissism are the antithesis of being good neighbors to all. Actually, in the wake of the pandemic we’re now realizing that being good neighbors is not incentivized in a system driven by property rights as the central organizing principle. It’s a proven recipe for an absence of care.

I’ve mentioned it before, Peter Pomerantsev wrote an important book about his time in Russia (post-Perestroika and during Russia’s move toward markets) that is very helpful in understanding the political sentiment that underlies DJT.  Russia’s ruling class, in the eyes of Pomerantsev, is essentially an exaggerated expression of libertarian philosophy with a twist of plutocratic oligarchy. Pomerantsev writes a short passage that clearly captures the Russian ruling class’s loss of any sense of or concern for a human commons. Here, Pomerantsev describes his affluent apartment building in Moscow:

“The dark green stairwell is full of cigarette ends and small brown puddles of melted snow knocked from boots. The apartment doors are padded for security, which makes them resemble asylum cells. Behind the padded doors are millionaire’s apartments, everyone’s done well in this city of baby-faced billionaires, but especially so on this block, the old Stalin gothic block reserved for party and KGB and diplomatic elite and great actors, the last to profit from the old order and the first to profit from the new one. Yet no one cares to band together and redecorate the stairwells. Care stops at the threshold of your apartment. You lavish and stroke your personal world, but when you reach the public space, you pull on your war face.” —Peter Pomerantsev in “Nothing Is True and Everything Is Possible: The Surreal Heart of the New Russia, (pg. 116)

“You lavish and stroke your personal world, but when you reach the public space, you pull on your war face.”

So, now, in other words, it’s ‘I got mine, so you get yours, and, by the way, don’t tread on me!’—said from behind walls made of cannon balls, “Come, hear, Uncle John’s band.”

—I note that when I wrote my M.Div. credo paper (2005), some folks wondered what if anything my approach had added to the theological conversation writ large. I confess, I didn’t really have much of an answer at that point. However, I feel the past few years may have provided some vindication of my intuition in an emerging context that might help frame an answer for the relevance question. My credo is entitled: “Toward a Theology of Care.” [also see: The three hardest words]

It appears that while the guidance of our brilliant U.S. Constitution is necessary, it is not sufficient. Our bold experiment in democratic self-governance can only thrive in an environment of decency, e.g., shared norms of civility, grace and a genuine love (i.e., care) for all our fellow American humans. And then, through genuine engagement with the United Nations (or something like it), beyond into caring for all—Christ is all and in all (Colossians 3:11).

Next week: We’ll continue in our “Picking-up after an Apocalypse” mini-series. Come and see.

I never know what I’ve said till I hear the response. What did you hear me say?  Note: I know, trying to introduce a big-picture idea like Spiral Dynamics (a complex developmental anthropology) in this format is ambitious. So, I’m using a serial-approach. Blog introduction (June 30, 2018). First in series (July 1, 2018).

New animation with lots of symbols ….

Archive of posts related to this mini-series:

‘Picking-up after an Apocalypse (part 3),’ ~ This is really messed-up

‘Picking-up after an Apocalypse (part 6)’ ~ Is MAGA a death cult? 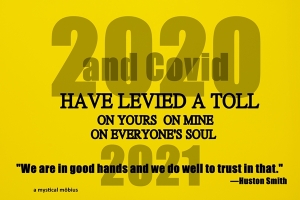