I heard a great sports analogy this week on a teacher’s podcast. I’ll just share a short clip from episode eight. It enumerates four key values systems — e.g., self-discipline; ambition; sensitivity; expanding-horizons — in play in contemporary education, and offers a very helpful analogy for the dynamics at work:

The podcast is called Reinventing Education (here) and it looks at how competing values operate within the education space. As the above clip indicates, four different agendas, methods, rules, and ideas about successful outcomes all vying for dominance within the same immediate sphere. Until we recognize this interdependent-yet-competing-values dynamic, we’ll never be able to strategically, or even intentionally, influence its effects.

This blog site is endeavoring to look at decency through a very select framing. This serial blog has been my way of organizing and expressing my thoughts about ‘VALUES‘ systems from a Gravesian standpoint. What I am trying to get at in these faint attempts to write here are the animating energies; that is, what it is that animates human beings to think, speak, and act in the ways that we do—and so I’m taking ‘values’ in a Whiteheadian, Process sense. Values constellations, or “vMEME” systems hold the keys to unlocking the energies that drive us.

So, why do new  systems of values emerge? As Rod MacLeod points out in the above audio clip, the answer is life conditions. New values emerge in response to changing life conditions. New value sets seek to meet the challenges of emerging conditions as in our historical movement from feudal society to an authoritarian class system of early industry, to a free market democracy, to a social-democracy, to our current V.U.C.A. life conditions, for instance—Volatility, Uncertainty, Complexity, Ambiguity. Expanding the sphere is an answer to the limitations of the earlier system to meet the emerging life conditions more effectively. It is famously reported Albert Einstein said,

“Problems cannot be solved with the same mind set that created them.”

A new values set also seeks to put overreaches of the previous system[s] in check.

Last week we began our consideration of greed and the primary value system through which it gained dominant ascendance, that is, Orange [ER], merit values. Building on that, I think a brief caution is in order before we move on. We need to be very careful not to toss the Orange [ER] baby with the overreach-bathwater as we consider greed, or any overreaching expression of any values set. We need the healthy dimensions of Orange values. The shadow work the blog has been attempting to do only seeks to bring light to the blind, or unhealthy spots in the expression of our values. Remember, each system of values manifests both healthy and unhealthy forms of expression. Sturdy wisdom is available to help us with this caution regarding conflating healthy ER with unhealthy ER and reducing ER to greed.

John Wesley had a saying that, rightly understood, makes a very helpful guide …an admonition on the acquiring of money:

John Wesley made a great deal of money through his publishing concerns. We have records that show that Wesley himself lived the entire span of his years on the same hundred-pound-annual-salary that he had earned in grad school.  Could you live your life on the budget you maintained while in grad school? Yeah, that’s the kind of DQ discipline that Wesley had around money and his faith.

We’ve talked about the admixture nature of values in human expression. A naïve expression of the Orange [ER] values system may be fueled by other value sets. For instance, naïve Beige [AN] ‘survival‘ values may be channeled by greed resulting in an overreach expressed through and emphasis on security needs, and enhancing hedges against future security needs. Then, too, overreaching Red [CP] ‘ego‘ (control) needs can combine with Beige [AN] ‘survival‘ values adding fuel to the security project.

When overreaching Red (ego) ‘power’ is matched with the opportunities provided by overreaching Orange [ER], ‘merit‘ values, greed often takes on a truly toxic capacity—Koch brothers in relation to fossil fuels, for example. Clean, sustainable, renewable energy sources are dismissed by the Koch’s; in fact they work very hard against advancing clean, renewable energy. Clean energy now would mean leaving far too much money on the table by the fossil fuel industry the Koch’s help control, social costs be damned.

To the delight of many corporate players, for the past twenty months—and in draconian fashion—the current E.P.A. has been steadily rolling back the accumulation of many years of environmental protections, like those against toxic chemicals, on clean air and water, and even lowering CAFE standards on automobiles. 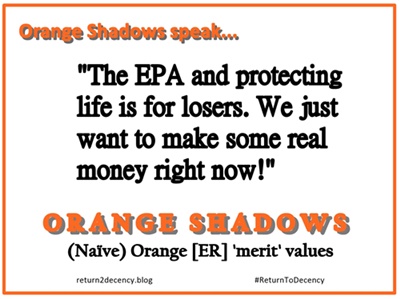 Interestingly, Blue [DQ]—usually complicit in most situations in some way—can play an important role in greed as well. A shadow of Blue is misunderstanding the sacred text [biblical or constitutional]. Faulty interpretations are often misappropriated and exploited for an overreach by Red/Orange. The biblical narrative of human kind made in God’s image, and given “dominion” over the earth and her offspring can justify nearly anything done to mother nature in man’s interest. With a strong doctrine of God’s sovereignty, this can quickly turn existential.

In Genesis 1.28 God gives us dominion to care for the earth and all of her manifestations. Naïve Orange frequently misinterprets this to mean: given dominion to exploit in any and all ways possible for an individual to benefit themselves. The fruit of this self-interested overreach compounds significantly when mixed with a strong doctrine on God’s Sovereignty. I’ve written about this dynamic on my Express the Mess blog page, a piece entitled, “Blaming God.” (see here)

Where does the space go? We’ll pick-up on the inter-system dynamics again next week. For now consider the 50 year old struggle between Orange [ER] ‘ambition‘ values and Green ‘sensitivity‘ and earth care. As a function of inter-system dynamics, Green’s visions of renewable energy, sustainable economies, and earth care have largely found blind eyes among Orange for the past fifty years. Until now. Finally, Orange is beginning to be able to see the problems of pollution, global warming, and unsustainable depletion of resources because they are starting to show up on the bottom lines of major financial institutions. [see here] 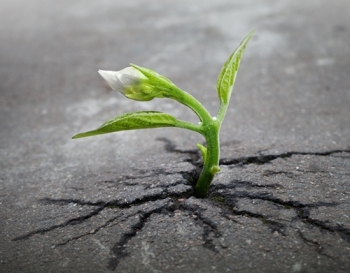 4 thoughts on “Seeing each other”